March 10, 2016 -  Orientation Meeting - Come celebrate the launch of Guelph’s Summer Lectures Club with coffee and cake. Meet your fellow members and learn how the lectures are planned with discussion of ideas for the summer.
Includes a short talk by Julian Sale on how online social media has changed the way we communicate.

Julian Sale - How to be plugged into the digital world - and NOT be overwhelmed by it all.
​Personal computers, tablets and smart phones have changed the world and continue to change it at ever increasing speeds. Whether we like the changes or not, they are here to stay, and it helps us to at least keep abreast of developments. Do you have a Facebook page? Do you know how to use Twitter? How often to you do a Google search? Do you do all this on a smartphone? Julian Sale will provide a brief overview of current communications technology, help you to understand the direction in which the computer world is moving, and perhaps offer some guidance if you find all this overwhelming - as many do.
Click Here for Speakers Notes
Scroll down for more 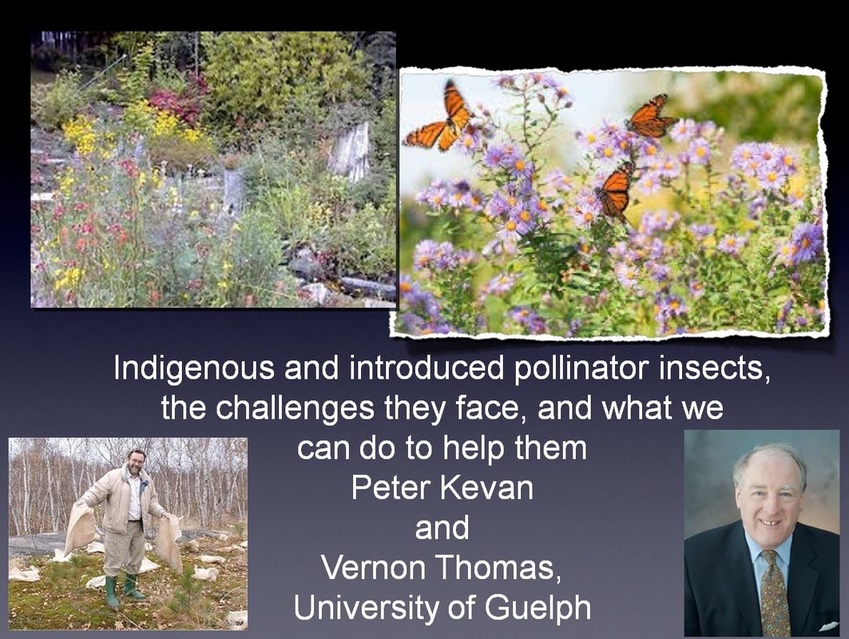 Pollinator insects and the challenges they face
Peter Kevan, Professor Emeritus, University of Guelph asks us to imagine a world without pollinators. He will help us gain an appreciation for indigenous Canadian and introduced pollinators, demonstrate how they fertilize flowers, and discuss the decline in their populations through herbicides, insecticides and monoculture.
​
Habitat for pollinators and what we can do to help
Vernon Thomas, Professor Emeritus, University of Guelph, explains that a big challenge facing pollinator insects, and one where we can all make a difference, is a shrinking pollinator-friendly environment. He will show how in our own gardens and in public places we can offer space where populations of pollinating bees, butterflies, moths and some pollinating flies can flourish.

"Fatal Light Awareness Program" (FLAP)
Paloma Plant of Erin is program coordinator of an organization committed to saving the thousands of birds that fly into high-rise buildings and other man-made structures. She is a lobbyist for building designs that are less hazardous to birds, she can point to some successes where FLAP has helped building owners to reduce hazards for birds and she will advise us how we can all help birds avoid window collisions around our own homes. 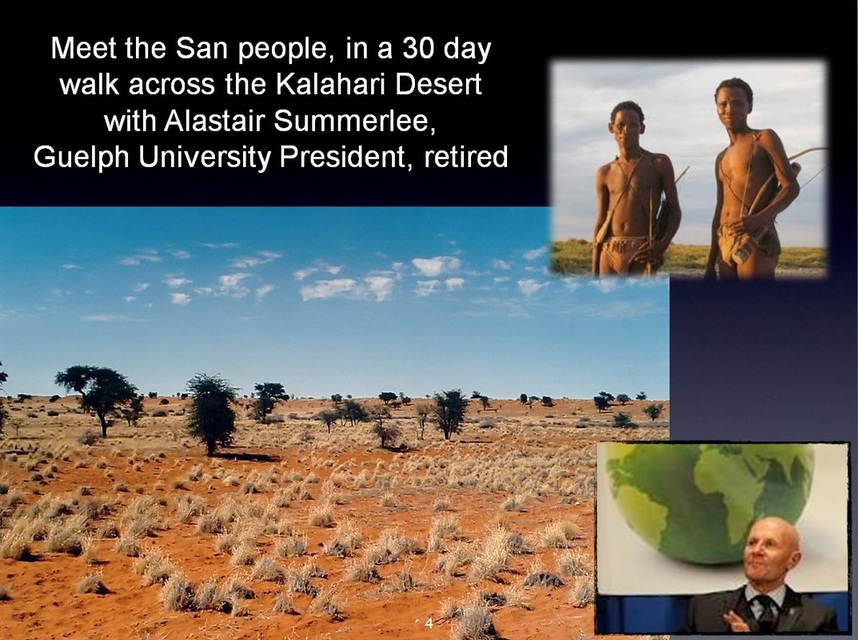 A walk on the wild side: 30 days walking across the Kalahari Desert
​Dr. Alastair Summerlee, past president of Guelph University, walked across the Kalahari Desert in Botswana in the winter of 2014, on the way attending the Festival of the San people, an annual event that goes back 3000 years. He will speak about his interactions with these interesting people and the world they live in. 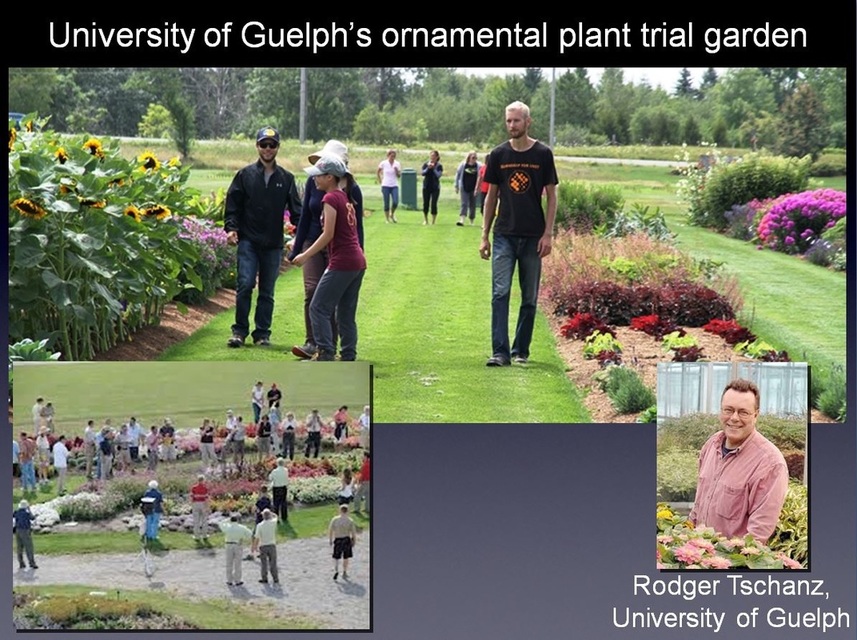 “University of Guelph’s Ornamental Plant Trial Program” manager and horticulturist Rodger Tschanz will explain the University’s valued contribution to the selection and cultivation of prize-winning ornamental cultivars in Canada. He will show how horticulturists and the public share in the selection of winning ornamental plants and the important economic spin-offs from this Guelph University initiative. Additionally, in late July or early August 2016, when flowers will be in full bloom, Rodger generously invites us to a guided tour of the University trial garden near the Turf Institute on Victoria Road, Guelph. A date for this visit is still to be determined. 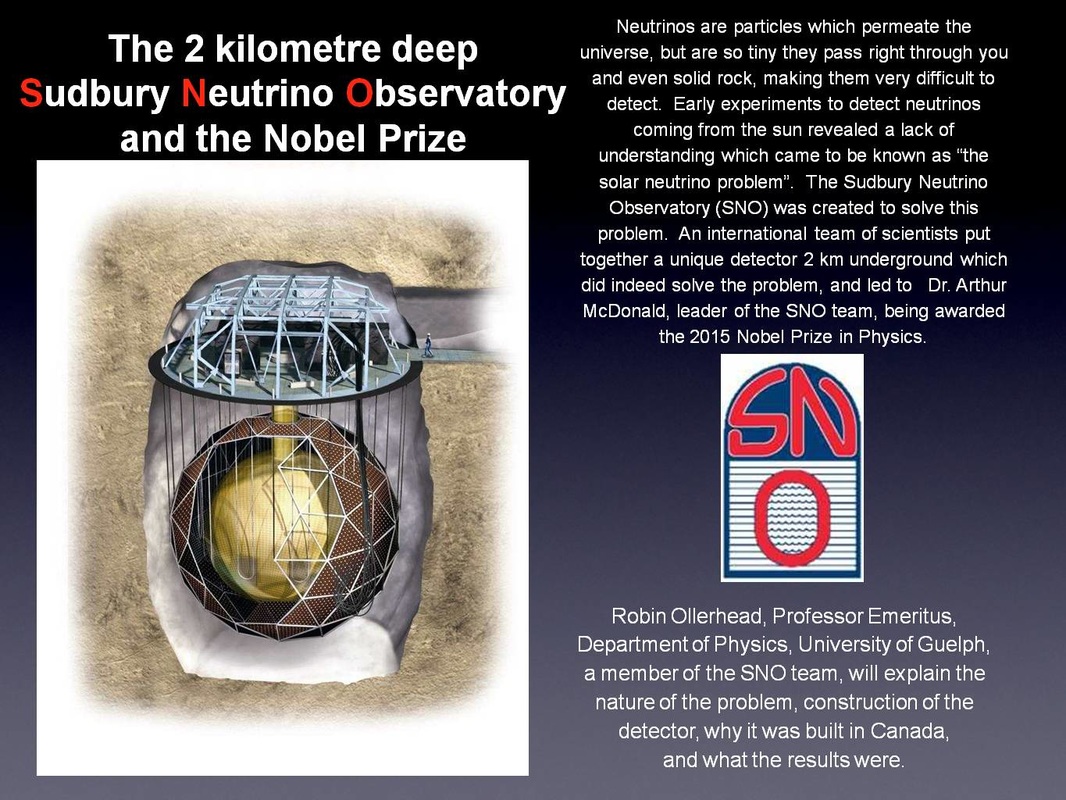 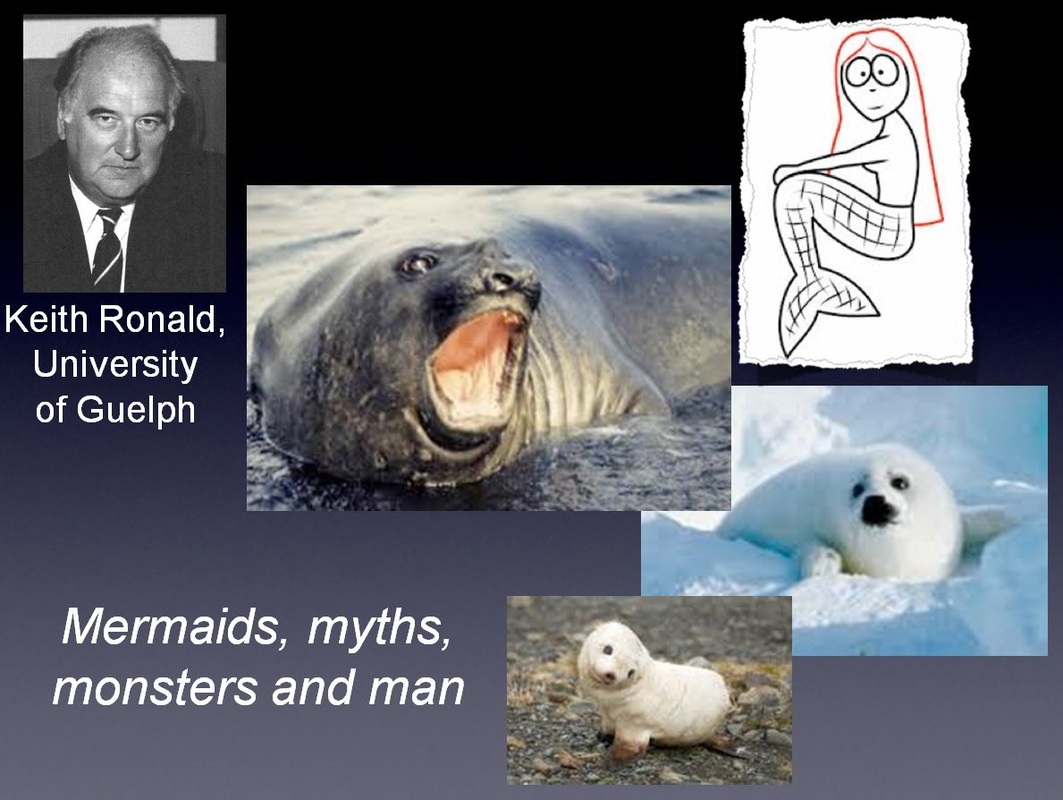 "Mermaids, Myths, Monsters and Man"
Keith Ronald, former Dean of Evolutionary Biology, University of Guelph, and first ever speaker for Third Age Learning, Guelph when it was founded 30 years ago, will speak about our relationship to marine mammals and how they have contributed to our evolution. This talk won the Rolex Environmental  Award and was purchased and shown on British, Japanese and German TV 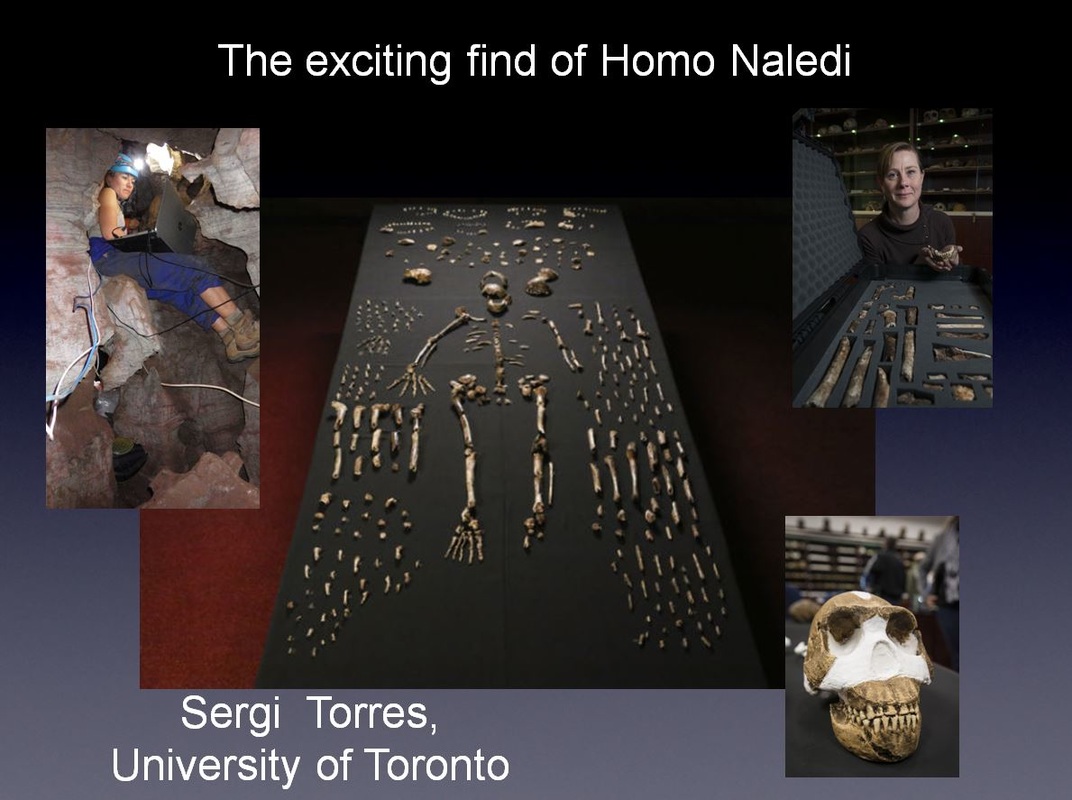 Sergi Torres -  "The Origin of Humans: New Fossil Discoveries"
The fossil record of our pre-human ancestors is at best sketchy. However several important discoveries have been made since the year 2000, including in 2013, a new species of early hominid, Homo naledi, found 75 kilometres north-west of Johannesburg, South Africa in a cave so inaccessible that the discoverers recruited very slim female paleantologists who could squeeze through an underground opening only 18 centimetres wide, to assess the remains. "Sergi Lopez Torres of the University of Toronto describes this find and several others that throw new light on our early hominid ancestors".

Emma Allen-Vercoe, University of Guelph - "The microbial community in our gut and why we need to nurture it."
There is a huge and diverse microbial world living inside our gut. How does the gut microbiota respond to its environment? Which bacterial species contribute to disease and which contribute to well-being? Emma Allen-Vercoe describes the current research in this field and why gut bacteria are essential to our health. If you think the contents of the gut are “dirty”, learn why they are “beautiful”; why you cannot manage without them; how you can help them help you. 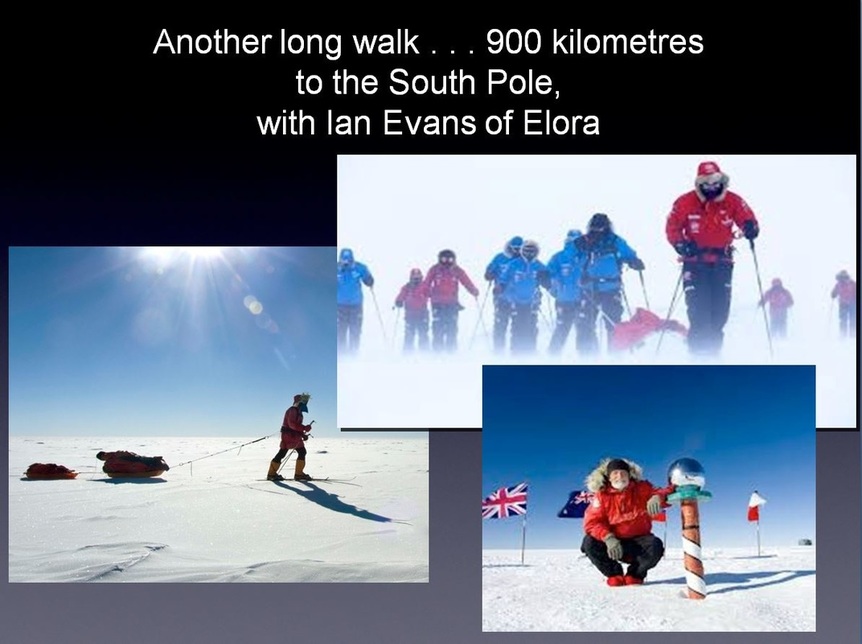 "Another walk on the wild side!   900 kilometres to the South Pole"
Ian Evans, a 60-year-old adventurer who lives in Elora, relates his extraordinary feat of walking to the South Pole in January 2015 and his experiences along the way. He will give us a first-hand description of the harsh world “down under” that we can only imagine.

Our first general meeting. How have we done so far? What should we do to keep our lectures relevant?  Election of executive committee for 2017. We need participation and volunteers!  This meeting and Lecture is FREE.

We are excited to announce that our speaker after the short AGM meeting will be:
Gary Draper who last winter presented a very popular “Whirlwind Tour of English Canadian Writing “ to a Guelph Third Age Audience. His subject . . . "THE JOY OF TEXT”. Gary will answer these questions: What are the pleasures of reading? What are the obstacles to reading? What should I read next?
​
Gary Draper has been a librarian, a book reviewer and an editor for Brick Books, for the New Quarterly, and freelance, and an associate professor of English literature at St Jerome’s University (University of Waterloo). He has a son, two wonderful grandchildren and two cats. Now retired, Gary continues to read, research and write. He has a great love for Canadian literature which most people who hear his lectures find infectious.  He has conducted several Third Age Learning courses and receives enthusiastic reports from Third Age members. ​
​